Day-43 of the Stanley Cup Playoffs:

INKTIME  on RINKTIME Observations and Random thoughts by Chris Madsen:

HISTORY LESSON, PART II:  When the Blackhawks and Bruins drop the puck for Game-1 of the Stanely Cup Final tomorrow night in Chicago, it will mark the first time a pair of Original-6 teams will vie for the Cup since 1979 when the Montreal Canadiens upended the New York Rangers.

I’ve had a chance to chat with some pretty staunch Bruins fans since unveiling yesterdays’s history of the Boston franchise and I was pleasantly surprised to hear these words:  “I didn’t know that…”

Today, I hope to do the same, and in some small way convey to you the men who had a vision, the details behind each team name, and the players that are part and parcel of two of the most “dyed-in-the-wool” fandoms in all of sports.

TODAY, I CONTINUE WITH THE CHICAGO BLACKHAWKS…Or, SHOULD I SAY “BLACK HAWKS”  (details forthcoming):  The Hawks are two years younger than the Bruins franchise.  Boston grocery tycoon Charles Adams unveiled the “B’s” in 1924 and Chicago was part of what was consider the first “wave” of expansion the National Hockey League would experience two years later.

Apparently, folks in the food industry were influenced by Mr. Adams endeavor, because Chicago’sfirst owner was coffee tycoon Frederic McLaughlin, who outbid grain magnate James E. Norris for the franchise.  Others involved during this growth spurt were the Detroit Cougars (now known as the Detroit Red Wings) and the New York Rangers.

However, in sharp contrast to Boston’s approach, Frederic McLaughlin elected to be his club’s Owner AND General Manager and decided to field the first NHL team sporting an all-American-born lineup.  However, Mr. McLaughlin was also apparently a very impatient man…he made 18 coaching changes in 18 years.

THE NAME:  Owner Frederic McLaughlin had been a commander with the 333rd Machine Gun Battalion of the 86th Infantry Division during World War I.   This Division was nicknamed the “Black Hawk Division”, after a Native American of the Sauk nation, Chief Black Hawk–who sided with the British in the War of 1812.

For many years, the name was spelled “Black Hawks.”   In fact, as a kid growing up in Chicago, many items like hats, stickers, etc, would have the spelling as “Black Hawks” while other items would spell it “Blackhawks”.  This ambiguity was finally put to rest in 1986 when the club “officially” decided on the one-word version–BLACKHAWKS– based on the spelling found in the original franchise documents.

THE LOGO:  This was the first: 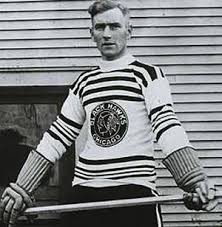 TALK ABOUT COMING A LONG WAY BABY:  This is what the players are wearing today…
THE PLAYERS:  When I think of the Blackhawks, the names that immediately come to mind are Hull, Mikita, Hall, Pilote, Stapleton, Esposito, Savard, Larmer, Wilson and sooooooo many more. Today, fans are treated to the incredible talents of guys like Patrick Kane, Jonathan Toews, Duncan Keith, Patrick Sharp, Corey Crawford and Niklas Hjalmarsson–just to name a few.  So instead of trying to appease all in Blackhawk Nation, allow me to instead recognized the chosen–those who have had their number retired by one of the most storied franchises in NHL history:
WHEN BLACKHAWKS FANS HEAR THIS SONG, THEY THINK OF HAWKS HOCKEY:  Check out this video.  It’s a slick little history of the franchise, and starts off with a Bobby Hull milestone called by Hall of Fame Announcer–and longtime Blackhakws voice, Lloyd Pettit, too…

WHY THIS SONG?:  “Here Come the Hawks!” is the Official fight song of the Chicago Blackhawks and was written by J. Swayzee, an avid Blackhawks fan.  The version you just just heard was produced by the Dick Marx Orchestra and Choir in 1968.  And to this day, following each period at the United Center you can hear a spirited version pounded-out by long-time team Organist, Frank Pellico. 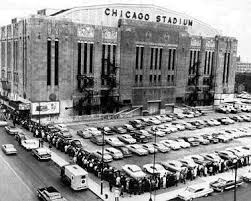 …and now…
*****
IT IS MY HOPE:  That this stroll down memory lane raises your level of appreciation for the genuine treat that every genuine hockey fan is in for…the Blackhawks v. the Bruins in the Stanley Cup Final.
As a kid growing up in Chicago, Hawks home games were NOT televised–so I was hooked by the radio call of Lloyd Pettit who created call after call that sparked my imagination and ingrained a love of the game and team that took me all the way to the Mighty Ducks TV Play-by-play booth–and that STILL exists in me today.
My calling allowed me to spend time with many of the players I idolized as a kid and my childhood dreams came true when I called my first-ever NHL Game in the old Chicago Stadium for Hockey Night in Canada–and then, of course, I can vivdly recall a sparsely populated United Center during my final season with the Ducks in 2002–my, oh my, how times have changed.  Just try to get a ticket now!
To this day, I hope that with every word I write you can feel my heartfelt appreciation for those who had a vision, took the risks and played out the games that created the moments that will forever be wonderfully seared in my mind…

My sincere “thanks” to ALL who have played their part in Chicago Blackhawks history.

TOMORROW ON  INKTIME ON RINKTIME:  The prediction for the Stanley Cup Final!