Day-42 of the Stanley Cup Playoffs:

INKTIME  on RINKTIME Observations and Random thoughts by Chris Madsen:

HISTORY LESSON, PART I:  As soon as the Blackhawks dispatched of the Kings in Double Overtime to set the stage for the 2013 Stanley Cup Final, immediately the media starting pumping the fact that this should be a classic confrontation of two of the Original Six teams.

True, Chicago and Boston are just that…but behind two of the best uniforms in sports, lies a story…and a history worth delving into.  Over the next two days, I hope in some small way I can convey to you the men who had a vision, the details behind each team name, and the players that are part and parcel of two of the most “dyed-in-the-wool” fandoms in all of sports.

But before there were Six, one had to make its way South of the Canadian border.  And that inspiration came from a man who knew a thing or two about feeding peoples desires…and that man was Boston grocery tycoon Charles Adams.  Adams was said to be so intrigued after watching the 1924 Stanley Cup Final between the NHL champion Montreal Canadiens and the WCHL champion Calgary Tigers that he convinced the National Hockey League to grant him a franchise for Boston.

THE NAME:   Charles Adams may have known the food business, but when it came to hockey he left that up to former star Art Ross–who served as General manager.  But the team needed a name and Ross was instructed to come up with with a nickname that would portray “an untamed animal displaying speed, agility, and cunning.” Ross came up with “Bruins”, an Old English word used for brown bears (from the Dutch ‘bruin’ meaning brown) in classic folk-tales. The team’s bearlike nickname also went along with the team’s original uniform colors of brown and yellow, which came from Adams’ grocery chain, First National Stores.

THE LOGO:  This was the first: 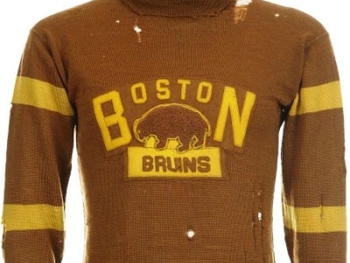 And this is what the players are wearing today:

The Boston Bruin “B” with the spokes stands for the Hub. The city of Boston is often referred to as the Hub of the universe or Hub, by Bostonians and others.

THE PLAYERS:  When I think of the Bruins, the names that immediately come to mind are Shore, Orr, Bucyk, Esposito, Sanderson, Cashman, Cheevers, Bourque, Neely and sooooooo many more.  Today, fans are treated to the incredible talents of guys like David Krejci, Patrice Bergeron, Nathan Horton, Milan Lucic, and Tuukka Rask–just to name a few.  So instead of trying to apease all in Bruin Nation, allow me to instead recognized the chosen–those who have had their number retired by one of the most storied franchises in NHL history:

WHEN BRUINS FANS HEAR THIS SONG, THEY THINK OF BRUINS HOCKEY:  Check out this video.  It’s a slick little history of the franchise, too.

Why this song?  Boston television station WSBK-TV began broadcasting Bruins games in 1967.  As the story goes,  the producers of the games were in search of a Theme Song.  Some say they were inspired by the Boston Ballet‘s annual Christmas performance of The Nutcracker …and coupled with The Ventures‘ version of the Nutcracker’s overture, known as “Nutty”, it became a staple for the opening piece of the Bruins telecasts.  And keep in mind that after nearly a half-century of ownership, the Adams family sold the Boston Bruins to Storer Broadcasting in 1972-73…which owned  WSBK-TV (Channel 38). 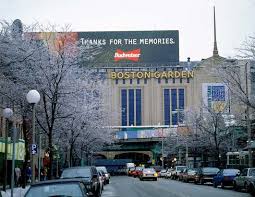 …and now…
*****
IT IS MY HOPE:  That this stroll down memory lane raises your level of appreciation for the genuine treat that every genuine hockey fan is in for…the Bruins v. the Blackhawks in the Stanley Cup Final.
As a kid growing up in Chicago, I hated (I “hate” using that word, but I can’t think of any other way to describe it) the Bruins–hated the Bruins!  But as I grew older and actually got to spend time with many of the players and had the privilege of calling games in BOTH buildings, I came to realize that my love of the game grew out of an appreciation for those who had a vision, took the risks and played out the games that created the moments that will forever be wonderfully seared in my mind…

My sincere “thanks” to ALL who have played their part in Boston Bruins history.

TOMORROW ON  INKTIME ON RINKTIME:  The history of the Chicago Blackhawks